Silly Things I Have Done in Taipei

Sometimes living in a foreign country and not being able to speak the local language can be a challenging experience and, personally speaking, I am prone to making more than my usual complement of mistakes.


Getting into Strangers' Cars


When I was looking for an apartment the other week a parent at Conrad's school told me that one was available in her block, and kindly offered that her husband would come and pick me up to go and look at it. "He'll be driving a green Toyota," she said. Sure enough, as I waited on the side of the street at the correct time a green Toyota pulled up directly in front of me. The windows were tinted so I couldn't see inside.

I reached for the handle to get in, and a tug of war ensued with the person who was already there. How strange, I thought, to come and pick me up then refuse to let me get in the car! It finally dawned on me that all was not as it should be, and I gave up my struggle. The driver pulled twenty feet forward, stopped again, a passenger got out of the back and walked off.

Not a word was said on either side.


I've been trying to find a route to Conrad's school that would avoid the necessity of taking the bus. Following Googlemaps on Andy's mobile, we once walked the shortest route hoping that, if it wasn't too busy, we could cycle to school every morning. Unfortunately there was a stretch that had a lot of traffic and there wasn't a pavement, so I was relieved to see that we could take a short cut over the lower hills of the mountain. It was very quiet, with very few cars and in fact, hardly anyone around at all! The people that we did encounter gave us some strange looks but, hey, we're foreigners - we get strange looks wherever we go.

After dropping Conrad off at school, I naturally took the same pleasant route back. As I reached the end, a policewoman stopped me and asked me where I was going. "Home," I said. "This is a police area. You can't come here." Humphhh. Why do the police get all the nicest areas?


Eating at Restaurants Where You Can't Read the Menu


Andy loves Japanese food. A couple of weeks ago he found a very nice-looking restaurant that promised some delicious fare. The only problem was that the menu was entirely in Japanese and Chinese. No English at all. No pictures, either. This is not a problem, usually, Andy can read some Japanese; enough at least, given time, to figure out a menu.

As we entered it became clear that this was indeed a high-end restaurant. Everything was tasteful and expensive. Only one other table was occupied, allowing the staff to be extremely attentive. Now, Andy can figure out a menu in Japanese if he doesn't have the head waiter standing next to him with his pencil poised over a notebook. In the latter situation, it becomes more of a challenge. He tried to ask the waiter to give us some time, but met with a blank stare. No English. He suggested I could help with the Chinese, but my learning has been restricted to less useful stuff so far.

Finally, he settled on one of the set menus. You can't go wrong with a set menu, right? Well, it turned out we had ordered one of those banquet-type meals that entailed the waiter bringing out a succession of dishes, each of which was at the more extreme end of challenging Japanese cuisine. I'm sorry, I can't tell you a lot about what we ate that night. I've blanked a lot of it from my memory. One dish was raw squid tubes stuffed with large raw fish roe. To cap it all, the chef was so proud of his efforts that he came out of the kitchen to watch us eat each masterpiece, checking on how much we appreciated his skill.

Of course, because neither of us could read what Andy had ordered, we had no idea how many of these dishes were coming. We hoped each one was the last, only to be disappointed. Finally, the pace seemed to slacken and we appeared to be heading for dessert. Now, in Asian cuisine, it's customary to have sweetened beans as a sweet dish. Even though I've encountered this several times over the years, I've never become used to the taste. So I was sitting in the restaurant, girding my loins ready to face the dessert, thinking to myself, please don't let it be red bean soup, please don't let it be red bean soup.

Yes, you guessed it.


Signing a One-Year Lease on a Very Noisy Apartment


Our apartment is fine. It's lovely in fact, now that I've cleaned it. It's spacious. There are two bathrooms. There are no insects. At the moment it's very bare because Andy's had to go back to the UK for a few days and I've just bought the essentials. We can kit it out properly together when he returns. Let me show you some photos (bearing in mind I don't have an estate agent's fish-eye lens): 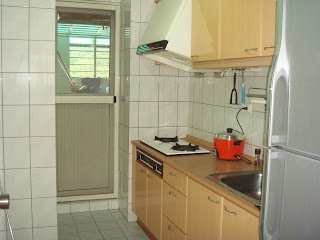 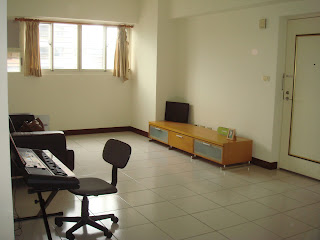 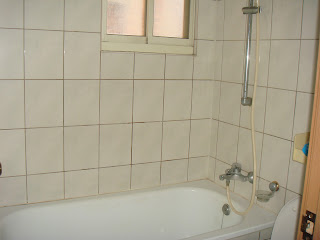 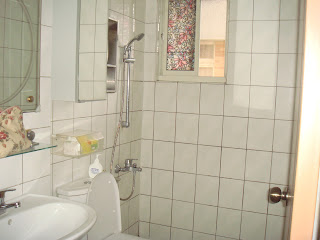 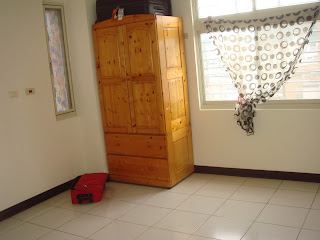 The only snag is that it wasn't until the evening of last Monday, when Conrad and I moved in, that I discovered that the large yard at the foot of the block is a recycling facility. Lorries come to drop off glass, plastic, paper and cardboard which are then sorted and transported away again. This is a surprisingly noisy activity, with the lorries' engines and reversing beeps, the glass crashing and the workers shouting to each other over the noise. Somehow they manage to time it so that the peak periods are at night when you're trying to get to sleep and first thing in the morning. There's also a resident cockerel and some vocal dogs.