An archipelago of nearly 100 small and large islands, Penghu lies off the west coast of Taiwan and is only 50 minutes from Taipei by plane, making it easier and quicker to get to that the more popular tourist beaches at Kending. We only had four days in Penghu, but we could easily have stretched that to two weeks and found something new to see and do each day.

Penghu has a rich and unique culture different from Taiwan, based on its challenging climate, geological history and fishing industry. Penghu islands are formed of basalt, which is slow-leak lava that has cooled and solidified, cracking into neat pentagonal and hexagonal blocks. The British will be familiar with similar structures at the Giants' Causeway in Northern Ireland. In winter the islands bear the full force of the North East Trade Wind, making conditions so difficult that in the past some islanders would simply go and work on the mainland for six months of the year.

The fireworks are exploded at the Rainbow Bridge, which was behind our hotel, and is lit up at night in all the seven colours you would expect. It crosses a small harbour entrance, and when the tide is out the sea bed is alive with crabs, starfish, shrimps and tiny fish. The children loved picking through the sand to find sea creatures. When the tide comes in the harbour fills to about 2 metres deep, transforming it into a massive sea water swimming pool. You can rent bikes to cycle around it, and you can also walk over the top of the bridge, which we did, and saw wonderful sea views. 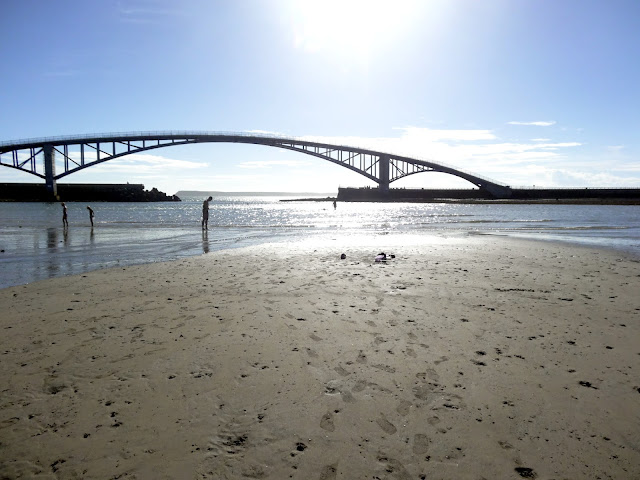 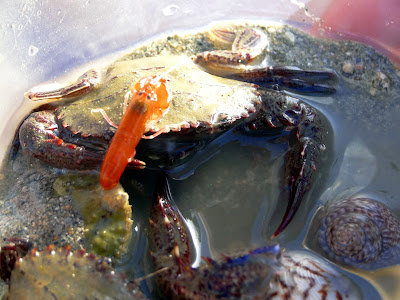 One child's catch from an afternoon's busy investigation of the sea bed. 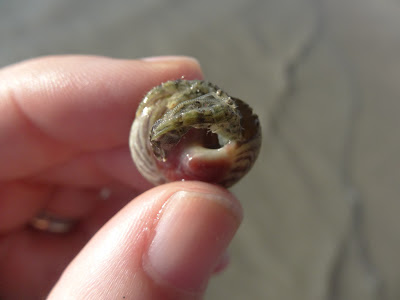 A hermit crab peeking out of its borrowed shell. There were thousands of these, crawling quickly towards the retreating sea.


The three main islands of the archipelago, Magong, Xiyu and Baisha, as well as one or two smaller islands, are connected by road bridges. There's enough to do just on these islands to keep you occupied for a week or so. On our first day we hired a car to tour in. We visited a couple of huge, ancient banyan trees, Penghu Aquarium, Whale Cave, Erkan Traditional Village and a temple/turtle 'sanctuary' (more on that later).

Banyans are traditionally planted near temples, because Buddha is supposed to have achieved enlightenment while sitting beneath one. They grow wide and dense, casting much-valued shade during summer heat. We certainly appreciated sitting beneath this 300 year old one. 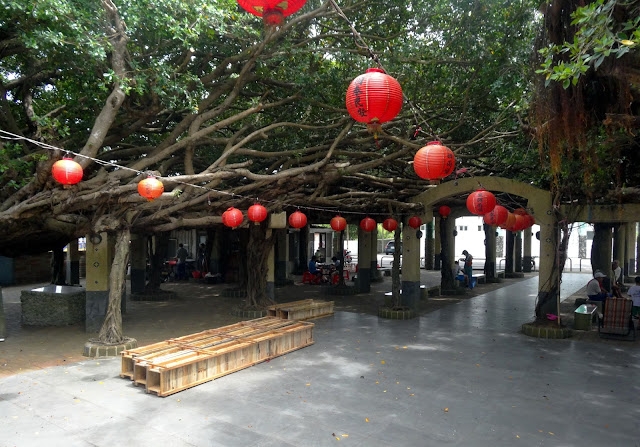 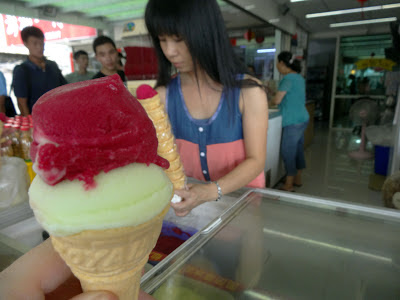 Penghu is known for its cactus fruit, which is used to make ice-cream (actually a kind of sorbet) and a refreshing soft drink. It's deep red in colour and all I can say is it tastes fruity, but unlike any other fruit I've ever tasted. I had cactus fruit and melon sorbet, and cooled off under the banyan tree.

Penghu Aquarium was decent considering the small island population, and worth visiting. The highlight of the day for us was watching a diver feed the rays, sharks and other fish in the main tank. Rays have an interesting way of eating, a kind of hoovering action. I couldn't imagine how they manage it in the wild, with their eyes and mouth on opposite sides of their heads. 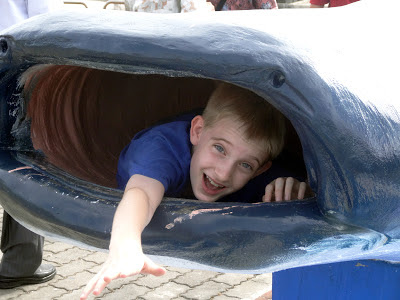 Outside there's a children's play area, but it's unshaded and was unbelievably hot. My son had a narrow escape from the whale shark that lives there.

The only part of our trip that disappointed me was visiting a supposed turtle sanctuary situated in a temple. Outside, there's a sign stating that the temple has a stamp of approval from a conservation body, and after seeing the conditions inside I could see why they had put up the sign. The turtles are kept in the temple basement in a grotto-style room, in shallow tanks that are completely bare. They're large, green sea turtles that in their natural state would swim thousands of miles of ocean every year just to lay eggs. The temple claimed, according to my friend, that they cared for small turtles until they were large enough to return to the ocean, but there were only very large turtles in the tanks, so I took their claim with a pinch of salt. 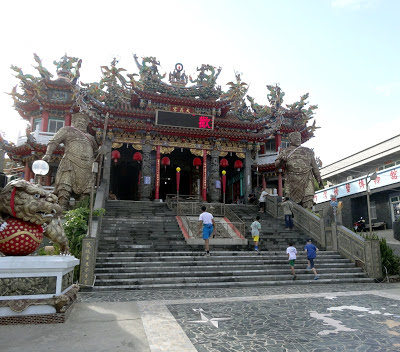 The outside of the turtle temple.


Whale Cave lifted my spirits. Formed by the action of waves on the basalt cliffs, the rock is named after its size, which is large enough for a whale to swim through. The local myth says that a whale was once trapped there and smashed its way free. There are amazing sea views and very welcome sea breezes at this spot, and the kids had a great time scrambling over and through the cave. 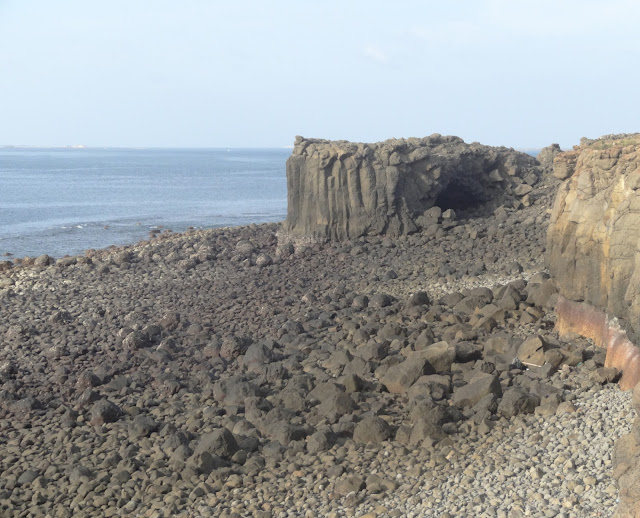 At the end of our busy first day we also managed to squeeze in a visit to Erkan Village, where people still live in traditional houses, some of which date back hundreds of years. 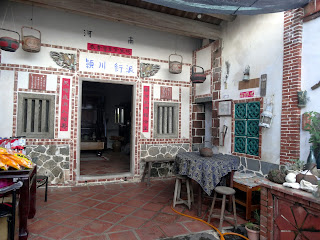 This house is about 400 years old and is easily the oldest house I've ever seen, or expect to see, in Taiwan. It may be due to Penghu's climate, which is much drier and windier than the mainland, that such houses survive. 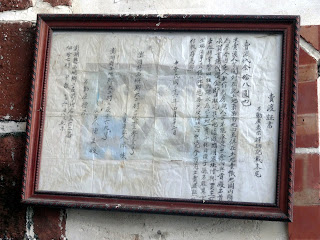 This document was hanging on the wall. It's from the time of the Japanese occupation of Taiwan and states the ownership of the house. 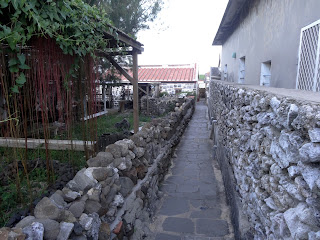 Here you can see the stonework of the walls, that was typical throughout Penghu. The walls were made of either dead coral, basalt, or a mixture of both, with the heavier basalt forming the base.

Walls like this are also constructed around small plots of land in low lying areas. Strong winds make it difficult for plants to grow and any shelter farmers can give helps them survive. In winter, the wind makes farming and fishing nearly impossible. A small wind farm currently operates on the main island. 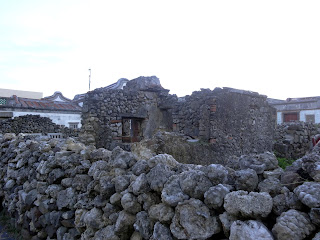 A house left to fall derelict, showing the interior coral and basalt walls. Material used for building is a status symbol, with wealthier islanders able to afford more durable basalt.
Pretty tired from our first day on the island we took it a little easier the next day, allowing the kids to go beachcombing and playing quiet games in the shade. I didn't seek out the local wildlife myself, but found that it came to me instead. I felt a large bump on my posterior, and after reassuring myself that I was getting needlessly hysterical and it was only a peanut shell, the darned thing moved, and, as I shoved my hand down my trousers to pull it out, bit me. 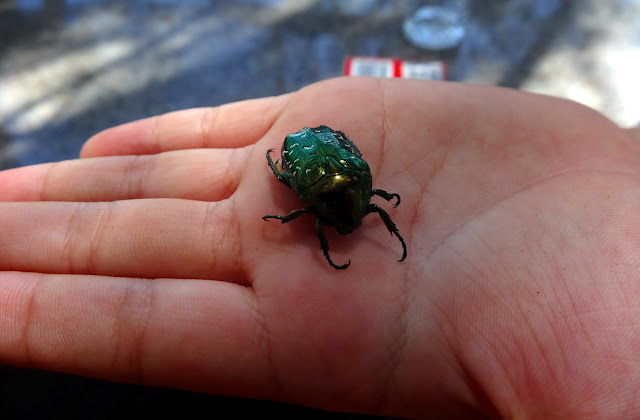 I can cope with being a mosquito magnet, but if these little guys also find me irresistible, it might be time for the old biohazard suit and independent air supply.

Another reason we rested up on the second day was because we had a squid fishing excursion planned for the evening. It's a popular tourist pursuit on Penghu and you need to book ahead. A boat takes you out into fairly calm sea water and you spend a couple of hours failing to catch anything, or at least that was the experience of all but one person on our boat. It's still quite fun, though. Then the fishermen running the trip put you to shame by scooping a few up effortlessly out of the water, which you can sample as sashimi with wasabi before disembarking. 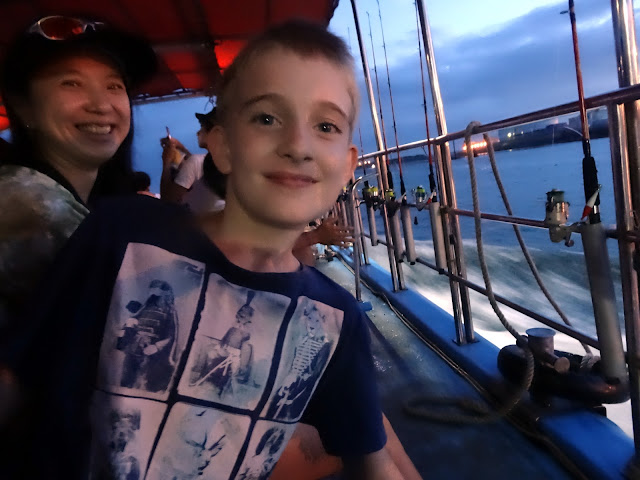 More on beautiful Penghu next week. 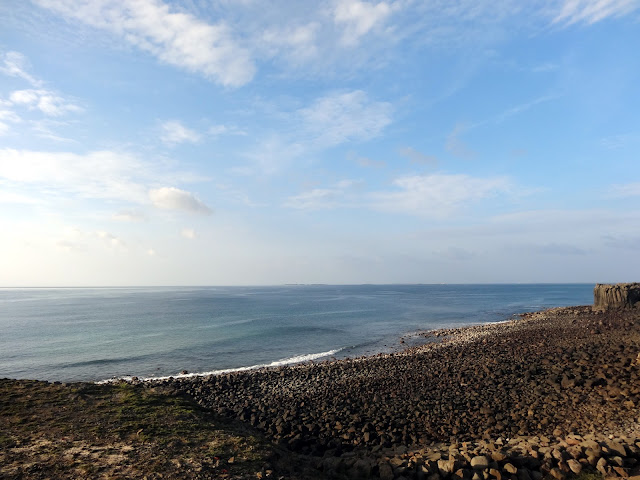