Not such a great week this week. Conrad has been having a difficult time at school trying to find things to occupy himself during the lessons that he doesn't understand, and fitting in with the other students. As a response he's taken to reading through much of the day, sitting in the library playing on the computer and refusing offers of help with his work. It's hard to know exactly what to do. A lot of this is due to his personality. He's competitive and wants to be the best at everything, which is of course impossible in his situation. We've had a talk about his ways of coping and agreed some new strategies. Andy and I will monitor the situation closely and withdraw him from the school if things get too hard for him.

Meanwhile, we continue to settle into our new area. We've decided to stay and tolerate the noise as best we can. Moving again is going to be disruptive and difficult, now that we've started to buy items for the apartment and with our shipment's arrival is imminent. Also, we would have no guarantee of moving somewhere else that didn't harbour a different nasty surprise. Maybe later, when we know the ropes better, we can seek out a better place to live.

There are some good things about this area. At the end of the road there's a small farmer's market at the weekend. Last week I went down and bought some delicious figs. They were a little battered but perfectly ripe and very tasty: 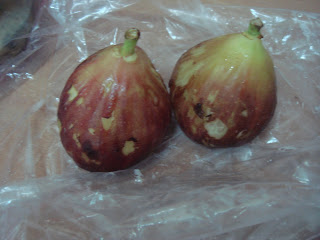 I did buy more but these were all that were left by the time I remembered to take a photo! I also bought some eggs and a particular kind of banana that you can't get in the UK. They look terrible when they're ripe enough to eat. In this photo, as you can see, they're starting to blacken, but they still aren't ripe. Once the skin looks disgusting you know they're just right and you can peel back that thin, soft, black strip to reveal delicious, sweet banana-ness inside. 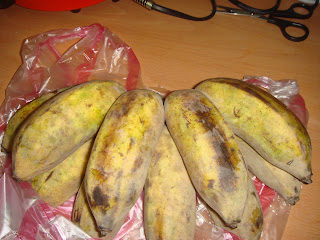 Another good thing about this area is the park at the end of our street: 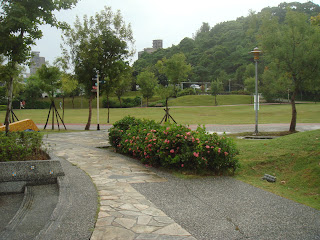 It backs onto the mountain, and if you stand at the far side of it you can hear all the birds, frogs and various sounds of the forest. I haven't ventured in yet because it looks quite dense but one day I may try. There is a set of play equipment, exercise equipment, basketball courts, a hard-standing area that would be good for skateboarding, a clay running track and a large pond with a bridge.

When we went down for the first time the other day we caused a small American Werewolf in London-style stir, but then gradually everyone ignored us and Conrad had a nice play on the equipment. When we walked over to the pond there was a group of older Taiwanese people throwing bread in the water. I haven't seen ducks here yet so I was curious as to what they were feeding. It turned out to be turtles and fish, and the competition was intense! The water would boil with fish wherever bread touched it, and the turtles were lucky to get any at all. We watched, intrigued, for a while, then a man kindly gave Conrad some bread to throw in, too.

We went back yesterday with a basketball and some stale raisin bread. Conrad shot hoops for a while then we fed the pondlife. I managed to get some photos, though I'm not sure how clear they will be. Here's a photo of one of the turtles: 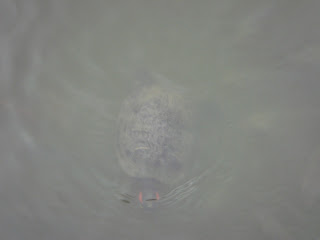 And here's one of one of the hoards of rampaging fish: 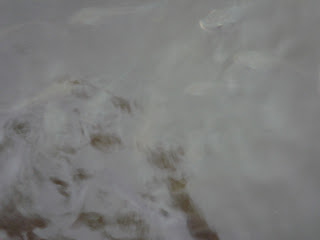 There's a whole soap opera going on down there. There's a tiny baby turtle that seems to be constantly stalked by a large albino fish. Maybe the fish knows the baby gets lots of sympathy bread thrown to it? There's also a very large carp or something, that I swear is trying to eat the other fish rather than the bread. The turtles are clearly the good guys, while the fish remind me of the cast of Eastenders. I'm really pleased to have this lovely park so close to home and I imagine we'll be going down there a lot.

Today we're off to an event organised by parents of English-speaking children at local schools. The idea is to provide some interesting educational activities for the children, plus a buffet lunch! Then we're going to soccer practice at Conrad's school. That should be fun. Here's hoping Conrad's time in lessons improves.
Posted by Unknown at 16:36