For some reason I have yet to understand, we're going to be spending part of Chinese New Year break in South Korea, which is currently enjoying a balmy 3 degrees Celsius by day, and night-time temperatures that are forecast to drop to -15. The problem is, a sensible former me decided that we wouldn't be encountering cold weather during our stay in Taiwan, so she failed to ship our warm clothing.

Anyone who knows me will confirm I'm not the most astute or taste-appreciating clothes shopper in the world. Back home, I'd honed it down to a fine internet-based art, using up minimum time and brain capacity. I don't read enough Chinese to enjoy the same luxury here, so face-to-face, time-consuming shopping is my only option.

Don't let me give you the impression that shopping for clothes in Taipei is an unpleasant experience. It is not, as evidenced by the hordes of people I encountered today. Department stores, independent retailers, night markets, malls; the choices are legion. I'm told in Yonghe in west Taipei, there are streets of clothing shops.

Here in eastern Taipei, my choices revolve around large malls such as Sogo, global chains such as Uniqlo, Esprit, Zara and Benetton, or any of the thousands of independent shops on streets or in night markets. Personally, I prefer to shop in large stores, but would like to buy clothes at independent retailers. Their clothes are more interesting and individual. However, shop owners usually attach themselves to you as soon as you enter the shop, and then, if you actually buy something, keep offering additional items all through the transaction process. In a large store, I have freedom to indulge my various clothes shopping neuroses in peace (though not quiet).

Zhongxiao East Road between Zhongxiao Fuxing and Zhongxiao Dunhua MRT stations seemed as good a place as any to stock up on warm winter clothes. I walked from one station to the other, visiting the shops along the way, in search of such things as boots, trousers, long johns, a scarf and anything else that looked useful. Here's a flavour of the day: 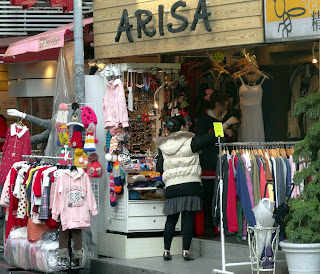 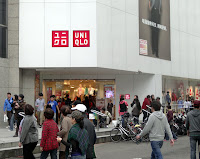 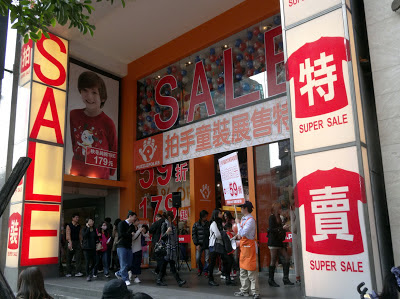 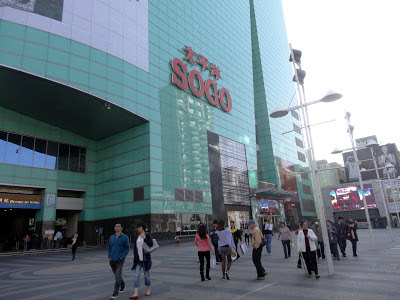 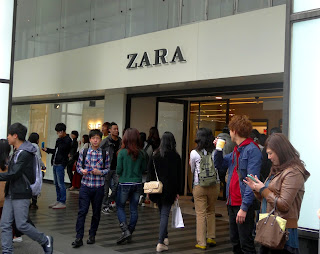 I was reasonably successful. There are two Clarkes shoe shops and while I blanched at the price, my new boots are likely to last me a good while. Trouser shopping was an interesting example of West meets East. I'm a medium verging on large in Taiwanese sizing, which I found out also means a 28, or a 67, depending on where you go. But I'm the wrong shape. I mean, like most women, I always knew that, but today I had evidence to prove it.

I go out from my waist downwards - I'm including my calves in that description - but the trousers I wanted to buy went the other way, starting out large at the waist and getting narrower all the way down. Part of the problem is that 'skinny leg' and 'stretch fit' are back in fashion. (How depressing it is to write the words 'back in fashion'.) I've never had, nor will ever have, skinny legs. But I think the main fault lies with my just being a different shape to Asian women. I also discovered, by the way, that Boyfriend Fit means Doesn't Fit.

I bought long johns for my son and I at Uniqlo, as I thought Japanese technology wouldn't fail us. I also bought a big scarf that vaguely matches the one winter clothing item that came with us from the UK, a woolly hat. It seems I really like that hat.

So, I survived clothes shopping in Taipei. (Seriously, it's a great place to shop if you enjoy that kind of thing, and millions here very evidently do.)

Next week's post will be a little late, and probably a little cold, too.

hi;)
I just happened to see your blog. Your article is interesting!
The East Area (shopping area around Zhongxiao East Road/MRT) is always full of people especially when it comes to annual sale.. haha
well, enjoy the trip in South Korea!

The East Area's like the rest of Taipei, then, haha! We had a good time in South Korea, thanks, uta.