Lying directly south-east of Taipei, Yilan county combines mountains, waterfalls, beaches and hot springs, making it a popular destination for city dwellers in need of a short break. The recent Qingming, or Tomb-Sweeping Festival, saw us, along with thousands of others, heading there to take advantage of the four-day weekend.

It was difficult to choose from the area's many offerings. The train line passes through Ruifang, Toucheng, Jiaoxi, Yilan and Luodong. Ruifang is the stopping off point that leads to the former gold-mining areas Jinguashi and Jiufen, but we'd visited these places on a previous holiday a few years ago. Toucheng is near some beautiful beaches and Guishan Island, but spring weather is unpredictable. Yilan city itself doesn't host many attractions. Luodong is famous for its night market, river path and Traditional Arts Museum. Our final decision was based on a shocking omission: in all our time in Taiwan, we have never visited a hot spring spa. So Jiaoxi it was to be.

We booked the Art Spa Hotel and used the national rail online booking system to book our train tickets, to be picked up at Taipei Main Station no less than half an hour before departure. Travelling by train used to be the usual way to reach Yilan, but a recently-built freeway tunnel through the mountains has opened up access considerably. Now, buses from Taipei take less than half the time of a rail journey. But I find travelling by train more pleasant, and there are beautiful mountain- and sea-views along the route.

I pitied the poor travellers who bought their tickets even later than us. The trains we took during Qingming were packed with stoic passengers standing in the aisles for hours at a time. With announcements and signs in English as well as Chinese, it was easy to navigate our way through the system.

Our hotel was only two minutes' walk from the station and we were quick to make ourselves at home.
The bathroom was equally inviting: 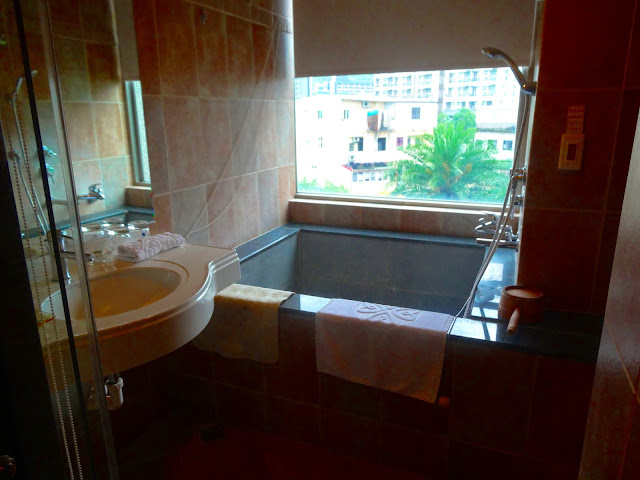 We could indulge in a private spa bath in our own room or take advantage of the hotel's on-site spa complex. Being a big fan of long, hot baths in general, I was deeply impressed with the hotel's spa. Every possible method of soothing the body with hot spring water that I could think of was available, plus a few more previously beyond my imagination. We could choose from large pools of hot, still, scented water, cool pools for the over-heated, large baths with spa jets to direct water from numerous directions, body-long shower beds to lie on as hot water cascaded down, jets of pressured water to provide deep massages, and slides, fountains, and ever-filling buckets for children. Saunas and hot slabs were also available, plus, I'm sure, other equipment I've failed to remember. It was spa heaven.

In the afternoon we wandered into town to find the spa theme continued. Restaurants had under-table hot spring water to soak your feet in as you eat. 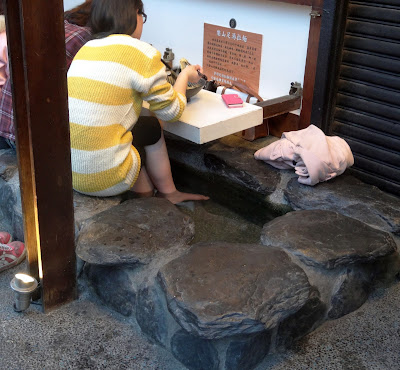 There were also large pools of fish that eat dead skin from feet, for general use. These were so popular I began to feel a little sorry for the fish. So many feet to service!

Fairground-style games stalls lined one street, along with the inevitable street food vendors.

Unfortunately the holiday ended the following morning. Heavy rain delayed our leaving the hotel and as the morning progressed, my son felt more and more unwell. We returned to Taipei that evening.

The planned expedition for the day had been to visit Longtan Lake, which promised some pleasant, easy walking in the fresh spring air. Other, more famous sights were bound to be very busy on a holiday weekend, so I wanted to leave Wufengqi Falls for another visit. Another popular place is Lanyang Museum, famous for its interesting architecture alone. 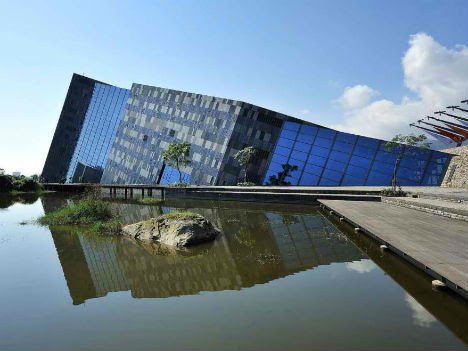 Our too-brief visit to Yilan county was a highly enjoyable, tantalising taster of the region's many promising possibilities.