Kitchens in most Taipei apartments are tiny, and apartments with a kitchen where more than two people can move at the same time are advertised as having a 'Western' kitchen, or, in other words, a kitchen for people who eat at home.

One reason for this is the fact that most adults, men and women, work and so have little time for cooking. This is true even for families with children. Another reason is that it's very easy, and often very cheap, to eat out. There are enough restaurants in Taipei to visit a different one each day of the week for a year, at the very least. Probably a lot more than that. Not only are there many, many restaurants, there are also numerous street food vendors, and, with the inevitable odd exception, their fare is tasty and safe.

Our own cooking and eating habits have changed considerably over the last year. I have, basically, become the laziest cook in the world. Each day my husband asks what plans I have for dinner. Each day I have no respectable answer. I feel the influence of all those other Taipei-dwelling wives too strongly. I can't overcome the inertia. I have embraced the group-thinking wholeheartedly and now my brain only admits the possibility of eating out. It rephrases my husband's question into 'where shall we eat?'.

I have many answers to this question. Will it be a special treat, such as the Tequila Sunrise where we ate last night, with their delicious crushed ice margaritas? Or the California Pizza Kitchen near Taipei 101, where the salads are fantastic? Or perhaps we'll just pop over the river to the Ponderosa near Taipei zoo, so we can choose from the large buffet on offer?

Now that winter's on its way, we'll probably be eating more hotpots, which are a kind of make-it-up-as-you-go-along chunky shop with a base of your own choosing. There's one we go to in Da'an, just a few stops down the MRT from us, which has an entirely lemon-themed menu. Also in Da'an, we sometimes visit a lovely authentic Thai restaurant. Or a burger joint a little further down the line.

These examples I'm giving are just the tip of the iceberg. There are also of course numerous traditional Taiwanese restaurants too, where more local dishes such as three cup chicken or green pepper beef are on offer. Also, each area has its own specialities. The Maokong area, famous for growing tea, has tea-themed restaurants. When I visited the area with number 2 son in the summer, we had tea noodles 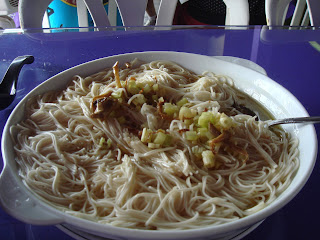 and tea, erm, something else 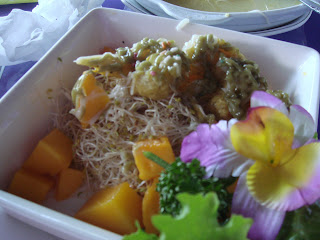 Proper Taiwanese restaurants are a little trickier for us as they often don't have an English menu so I have to limit our ordering to what I can roughly understand.

We have had one or two disasters due to being overly-confident in this area. The most recent one was when I ordered a dish where I recognised the characters for 'fish' and 'slice'. What I thought we would get was.....well, to be honest I probably didn't think that far ahead. What we got was very thick slices of sashimi, which is one of the few things that I really can't stomach.

But, generally, the experience of dining in Taipei is fantastic and only bound to get better as I'm able to read more Chinese. Mmmmm, I really hope my son's Chinese textbook has a story all about dining out in Taipei.