We've spent the last few days gathering together all of the bit and bobs my son will need when he starts the new school year later this week. The haul is quite impressive so far, and we don't have all of it yet. 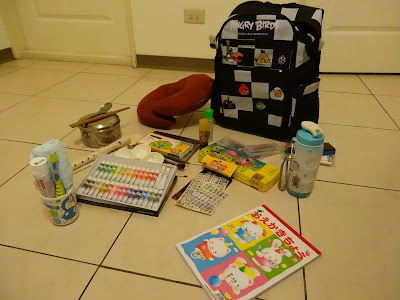 Last year I made the mistake of thinking that Taiwanese schoolchildren's needs were supplied by the school in the same way as in the UK, and my son started school with a tiny backpack and a pencil I think! Soon, it became clear that he was missing a lot of things other children had, and over the following weeks I managed to find out from various sources what was needed.

So, this year I'm determined to be fully prepared. Our first purchase was a large backpack.

The most important part of the school day is lunch, of course. Most children have school lunches, but bowls and cutlery are brought from home. Here's my son's pretty standard tiffin tin: 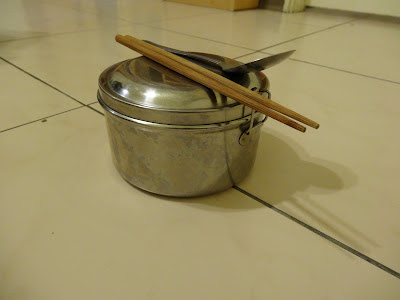 It's got a smaller bowl inside.

The children typically have rice, a meat dish and a vegetable dish. They also often have soup and maybe some kind of dumpling too.  Dessert is seasonal fruit.

An occasional treat would be pasta, (i-da-li mian or Italian noodles) or pizza.

Water is essential all year round. There are water dispensers in schools which dispense cold, room temperature and hot water. I think the room temperature water is available (and widely drunk) because it's a belief in Chinese Traditional Medicine that drinking cold water is bad for the digestion and circulation.

I have to say that drinking room temperature water on hot days takes some getting used to.

So a water bottle is another must-have. In my son's case, he needs several water bottles, as he has a rare and special talent for losing them. They're always found eventually by a classmate so it's just a matter of having several and rotating them according to which has been lost most recently. 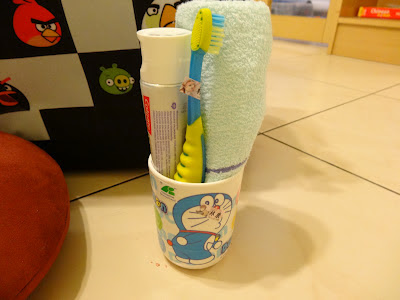 As all good educationalists know, primary education is about a lot more than academic learning. It's about teaching the child life skills that will set them up for a productive and happy future.

In Taiwanese schools, personal hygiene and cleanliness are timetabled into school life. Children's equipment includes a toothbrush, toothpaste, mug and flannel. After lunch, children brush their teeth and have a wash before nap time.

The education in cleanliness extends to their immediate environment too. The children clean the classroom and public areas of the school at the very end of the school day.

I have spoken to Taiwanese parents who don't like this. They think that cleaners should clean the school as happens in the West. Personally I think it's a good idea. The children can learn to be clean in their own homes, to work together to achieve an aim and to have some understanding and respect for people who clean for a living.

That's the reason behind the requirement, of course. Whether the children do actually learn these things is another question. In practice, they seem to have a pretty good time wielding brooms, rags and mops and making a game of it all.

If there is an item I would strike from the timetable, however, it wouldn't be cleaning, it would be nap time.

After lunch, the children must have a nap for about 40 minutes. They can't and don't lie down, though, but rest their heads on their desks. Sleeping on your desk isn't as hard as it seems, and I have to confess I learned the knack of this quite early on when spending day after day in the library when my son first started school. The habit continues in adulthood, with office workers also napping on their desks.

At first this seemed not only uncomfortable but also strange. I don't imagine a Western office worker would last long in their jobs if found napping regularly. And back home naps are something that children are expected to grow out of by the time they start serious schooling.

But here, schoolchildren have very long days, with many attending cram schools after the 8 am to 4 pm school day. Once they get home they then have dinner and homework to get through before they can finally go to bed at maybe as late as 11 pm. So it does make sense to have a nap time.

In practice however, it's about as easy to sleep on your desk in a classroom full of children as you might imagine. Despite spending many days in school I didn't ever see a single child actually asleep during this time. For my son, it's probably his least favourite part of the day. 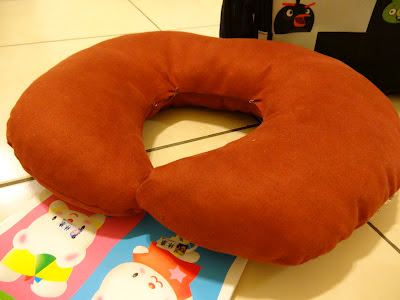 Still, he has to do it so into the backpack goes a cushion of sorts. 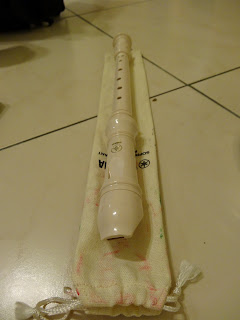 Now that my son is in Grade 3, his school curriculum will include music. For this, he needs his own recorder. Ours is already rather manky, unfortunately!

Taiwanese parents have to supply all of their children's equipment apart from books and paper. Even books have to be purchased from the school, although as I can't remember how much they cost I don't think they're very expensive. 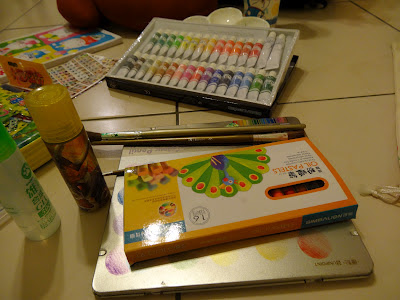 Children's needs extend further than pencils, sharpener, rubber and pencil case, though. All art equipment is supplied by parents too, including paints, glue, paintbrushes, colouring pencils, felt tips, chalks and pastels etc., although the latter are probably a matter of choice.

Whiteboard markers and a board eraser might be required too, if the teacher requests these. 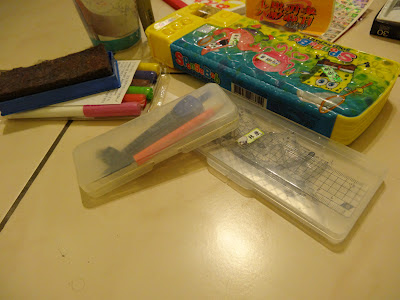 For maths work the children need compass and protractor, ruler and set squares.


Finally, the children also need a means to recognise which of these items belongs to whom, and they also need a means to identify each of their many books. Rather than asking their children to laboriously write their names on all their things, parents can give them specially printed stickers.

Here are my son's which a friend kindly got made for me: 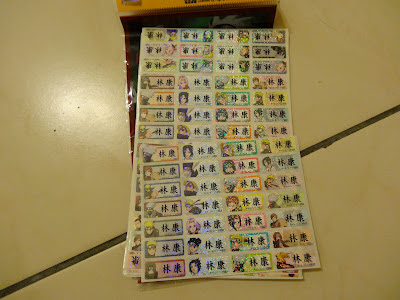 There are more than 200 there, so they should last him a while.

Despite his school bag now being completely full, we still don't actually have everything he needs. One important item still missing is his school dictionary. The nature of the Mandarin script is such that there are several ways to look up characters in dictionaries, so having a good dictionary to practise with is essential. Most Mandarin homework will include looking up words.

Once we've got that, we'll be just about all set for the new school year starting later this week.

He's looking a little weighted down I think! 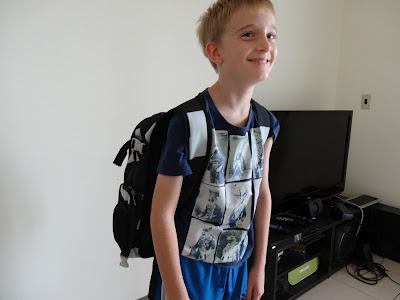