Northern Taiwan isn't famous for its beaches but there are a few which are nice. So when, last Monday, Conrad had a rare school holiday, we decided to travel out to Fulong Beach. One of the reasons northern Taiwan's beaches aren't particularly well known is because Taipei itself is inland and a trip to the seaside, especially if going by train, can take an hour or more.

We managed to negotiate the local train section of Taipei Main Station well enough, that, eventually, we found ourselves on the slow train that stopped at Fulong. The journey took an hour and a half and we were standing for half of it, so we were hoping for something to make it worthwhile by the time we arrived. We weren't disappointed.

Fulong Beach consists of two small spits leading out into the sea. The smaller one is directly opposite the road that leads down to the water. To get to the large beach, you turn left and follow the signs to the waterfront. This beach is private and you have to pay to enter but it's a small fee. 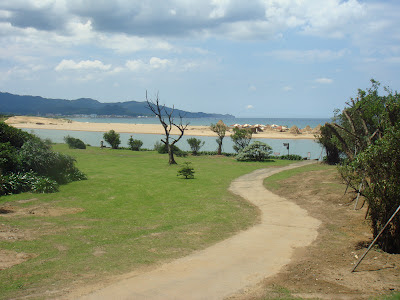 On the day that we arrived the entries to a sandcastle building competition were still remaining to view, though I'm not sure the word sandcastle appropriately describes these structures. How they withstand Taiwan's downpours I have no idea. 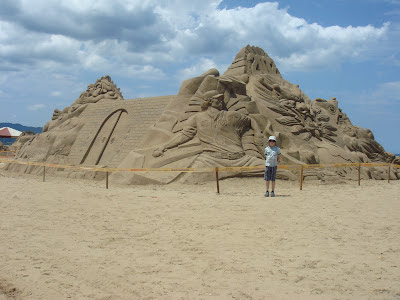 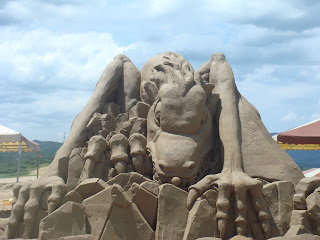 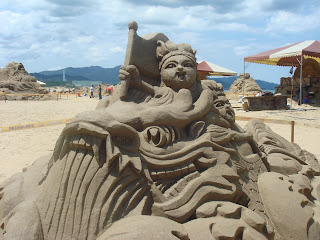 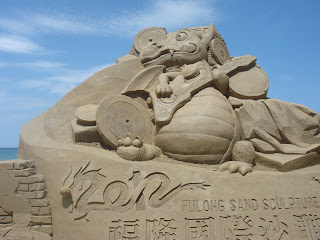 It was a blisteringly hot day and many people had retired to the only shade available beneath the small bridge to the beach, but what's that saying about mad dogs and Englishmen? I was fully prepared with sunscreen, sunglasses and hat, and it was one of the few dry and sunny days we'd had in a while. Besides, while Conrad never wants to go to the beach, once we arrive, I can't get him to leave. He launched himself into the waves and it was clear we were going to be there for some time. 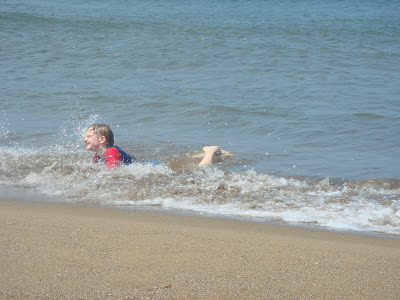 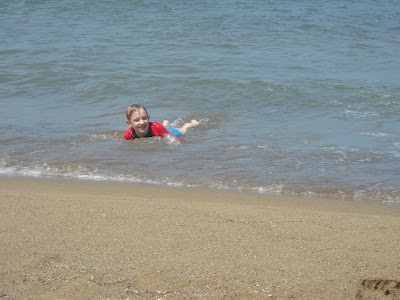 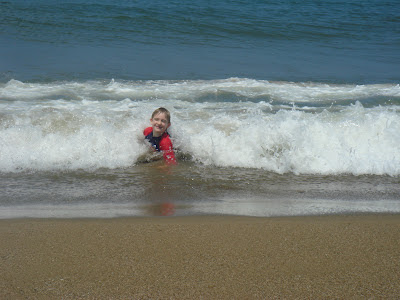 For myself, I had my Chinese coursebook, a beautiful view - 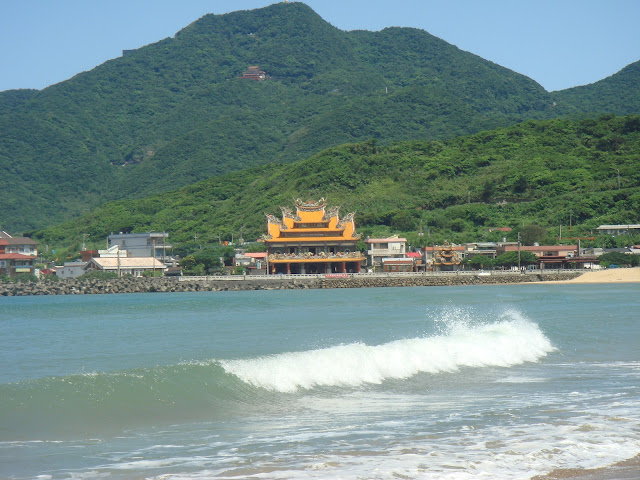 - and an entertained child. I was set up for the day.

But here I'm sorry to say that here the photo record ends, because calamity struck. Not once, but twice.

As you can see, the waves were quite high that day. Maybe not high enough for surfing, which is apparently a pastime at this beach, but high enough to catch me out. I'd set up on the dry sand above what I thought was the high water line when, as I was deeply immersed in trying to read Chinese, a freak wave came up the beach and soaked me, the towel I was sitting on, my Chinese book, Conrad's dry clothes and my bag!

I saved my phone and camera before the water reached them but I had an unfortunately-placed wet patch in my shorts and everything else was drenched and sandy. Conrad found this even more entertaining than the waves. But karma was about to strike.

I tried my best to rinse out the sandy towels etc. in the sandy water with little success. The lifeguards were completely unsympathetic to the extent of not allowing me to hang anything on their ropes to dry.

I moved a considerable distance from the water's edge and sat in the hot sand. I optimistically tried to dehydrate my sandy book in the sun (it was ruined, I had to bin it).

We lasted about another thirty minutes before Conrad came hobbling and crying out of the water, clutching his foot. There was nothing to see at first, despite pouring water over the painful area to clear it. Then in a few minutes the raised blisters of a jellyfish sting began to show.

Conrad continued to wail. I continued to pour fresh water over him. A lifeguard helpfully told me it was a jellyfish sting. No, really?

After a while, Conrad's wailing abated enough for us to hobble back to the station. A visit to buy ice-creams miraculously relieved the pain. We got the fast train back to Taipei and Conrad had something to write about in his school diary that night. So the day was not lost. Fulong Beach was worth the trip.