The School Fete (and Wedding Day)

Have you ever been to an event where you didn't know quite what was going on, why you were there or what you were supposed to be doing? This happened to me yesterday.

Last week I received two or three notes from school about some kind of event on Saturday, but all I could really understand was the date and the fact that it was something to do with love, judging from the hearts illustrating the messages. So I asked around as to what was going on, and despite two or three different people explaining the event to me, I was still confused. 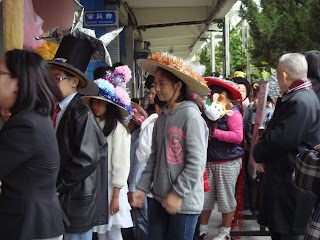 I should say that it had been explained to me that two alumni of the school had married each other, and that they were coming back to the school to celebrate their vows or anniversary, or say hi, or something like that, so that was the reason for the wedding theme. Anyway, of course, not having a clue what was going on, I hadn't got Conrad dressed up or anything. In fact, he was dressed for what promised to be a wet and muddy football practice later that day, so he was wearing tracksuit bottoms that were too short and an old hoody. Not your typical groom.

The children had to line up in pairs, go under the bridal arch to a posing spot in front of the audience, walk up the cat walk, pose at the end, walk back down and pose again, then off the stage. They were all introduced over the background music by two teachers, and the audience applauded them. It was difficult with the lighting conditions but I managed to a few reasonable photos:

The children seemed to have a great time and they looked gorgeous. Lots of girls especially had really gone to town and many couples had put a lot of thought into the poses they were going to strike on the catwalk. Some children were too cool for words: 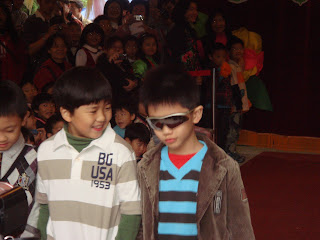 The entrance hall to the school had been decorated in keeping with the theme of the event. Hearts abounded. I took photos but of what I wasn't 100% clear at the time. 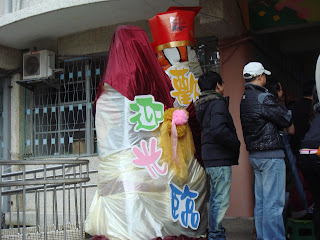 It was only later I realised that this is actually a Chinese bride and groom. 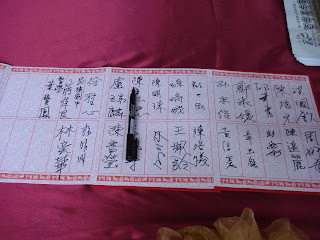 I had to sign this on the way in. I'm not sure why. Maybe it was a record of people who attended that day for the married couple or the school? 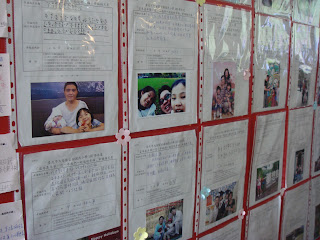 And this was something I realised Conrad should have done for homework last week.

Once the wedding-themed celebrations were over, the children had to go from class to class with a sheet to be stamped as they completed the different activities, with the promise of a prize! Soon children started appearing carrying these: 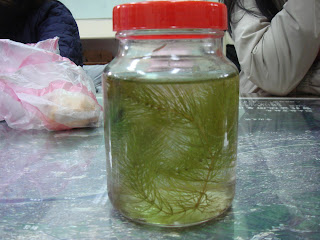 Yes, this was the prize. No, it isn't a jar of pondweed, as I originally thought. Well, it is, but there's something else in there. The prize was some live freshwater shrimp. As of this morning (the day after) most of Conrad's are still alive.

The rest of the day was a typical school fete. Very like a UK one in fact, including the rain. A parent at the school told me that it always rains on fete day at this school. One year a typhoon was predicted, so they cancelled and rearranged for another day. The day of the supposed typhoon was fine and clear, but on the new date it rained.

I did the obligatory browsing and purchasing of items. Here's my haul. Not bad I think you'll agree. 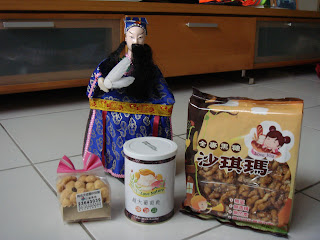