Cycling in Taipei isn't as popular as riding a scooter, but nevertheless many people do it, often confining themselves wisely to the pavements (where they exist). I'm not a very good cyclist and so in the interests of public safety (and my own) I don't plan on cycling in the general roadways, although I do harbour a secret ambition to steer the bike with one hand and hold an umbrella over my head with the other as the locals can.

Fortunately there are extensive pleasure cycling tracks around all the riverways throughout Taipei, as can be seen on this map. Conrad and I have now been out twice to explore our nearest cycle path, each time just cycling a few miles then back again. The river closest to our house is surrounded by high flood barriers, so in order to get to the river you have to find an entrance point, which is basically where they have opened a small section of a massive metal gate.

Once through, you find yourself in a lovely riverside park area. Here are some views taken from the top of the barrier: 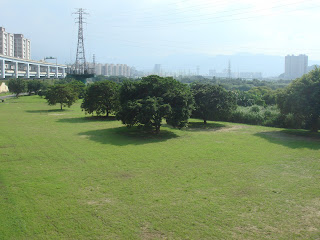 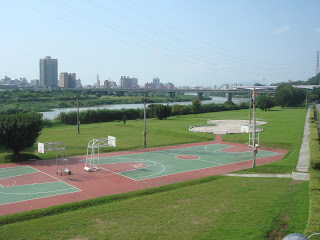 The area has lots of community spaces which we've found are used extensively at the weekends (these photos were taken on a weekday when I first discovered these parks). On our last trip there was even a ballroom dancing class going on underneath a bridge over the river. The cycle paths are also busy with cyclists, joggers and walkers.

As you can see, the river is quite large, so I hate to think what it would be like if the flood barriers were ever needed! 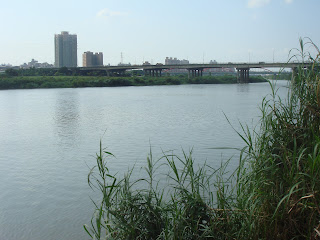 Here's a view from the river looking back to the barrier. Above it is the freeway/overpass that eases some of the congestion on local roads. 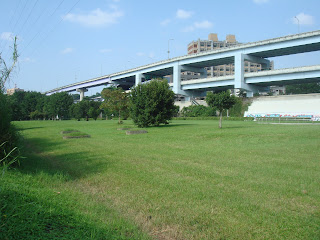 So I anticipate many enjoyable excursions over the coming weeks. I have a very sedate lady's bike with a basket, in which I'll pack some refreshments for our expeditions. Who knows, maybe one day I'll even take a ballroom dancing class along the way. 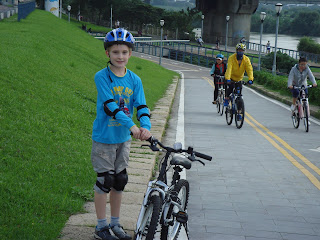